So, I have everything I want now to continue with my upgrade project. I have a donor body, MIM electronics, a donor neck, and all of the parts I’m going to need to build a decent daily-player that I don’t have to worry about wacking against my keyboard tray while I’m playing. I do own a mint MIM strat with OHSC that I’m trying to preserve in it’s pristine state, so this guitar should fit the bill.

If you’ve read Part 1, then you should know that my initial attempt at this was mostly a success, albeit disappointing in some ways. In this article, I’m going to think out loud, and go over the parts I was unhappy with, and talk about some of the things we can do to improve on it. Mind you, my background is in engineering, so some of this might get a bit over-technical, but bear with me – the result will hopefully be worth it.

60-cycle hum, and other environmental noise

Anyone who plays a single-coil guitar knows all about noise. My music teacher (Greg Lander) and I were discussing the issues, and he noted that when he does get that hum, he can change his position with his strat, and the hum tends to diminish or go away. This is typical of radiated 60 Hz hum (meaning like radio waves). His guitar is acting as a receiver, just like an AM radio. If you have a small AM radio, you can reproduce this by tuning in a marginal station, then rotating the radio – the signal will get stronger when the (internal) antenna is oriented either directly towards, or directly away from the originating station’s transmitting antenna. If you’re interested, here is a more in-depth article about how exactly that all works. Suffice it to say, that you want to instead, make your guitar into very poor radio receiver.

Radio receivers are frequency-specific devices. An AM broadcast radio is purpose built to receive stations within the AM broadcast band. However, a guitar is not built specifically to receive any particular band. It is probably better at some than others, but doesn’t reject anything in particular, so depending upon various design factors in the building of the guitar, it could potentially receive any frequency that is available.

So, the goal here is to shield the electrical parts from exposure to these errant bits of noise traveling through space. There are a number of manufacturers that offer foil tapes and shielding paints that help prevent electrical noise from reaching the electrical parts of the guitar. On newer Fender American Standard Stratocasters, for instance, if you remove the pickguard, you’ll see that nearly the entire underside is covered with an aluminum foil. Here’s a photo of a typical AM Standard pickguard back: 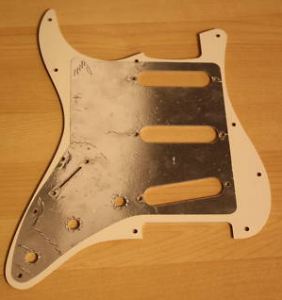 A Fender AM Standard's Pickguard Shielding

However, older Fenders have either just the controls sheilded, or they have a separate, metal, pickguard-shaped plate that goes between the pickguard and the body. If you have one of these metal plates, and it’s not aluminum, you may want to try the guitar without it! I’ve heard tell that the non-aluminum ones can effect the guitar’s tone.

If you’re saying to yourself “Gee, a metal plate must be better than foil”, having a metal pickguard plate is no better than the foil shielding. It’s exactly the same (albeit, perhaps more desirable asthetically). It’s the good electrical ground that’s the important part. Assuming that the foil has as good a connection to ground as the metal plate does, it will offer no less shielding than the plate does. However, the plate will hold up better to removing and replacing parts better, which given that it’s ground is mostly dependent upon it having good contact with the pots as they are mounted to the pickguard, means that if the foil at the controls pots is all scraped away due to removal/replacement of the pots, it can definitely affect the integrity of the foils connection to ground. In our project, we’re going to make sure that we’re not dependent upon that connection for our ground, so it will be less important for us.

Additionally, I’ve often noted on many strats and teles that when you rest your palm against the bridge or strings, the hum is diminished. This tells me something about the way the guitar is designed, as well as why I’m hearing this hum. If you read the article referenced earlier, “How is my Guit like a radio?“, you may have some idea what I’m talking about.

So, in conclusion, the goal here is to have a finished project that is affordable (cost), sounds nearly as, if not as good as any MIM standard (tone), keeps that tone over time (consistency) and is nearly as quiet as any strat with noiseless pickups, but with no loss of tone (noise reduction). To achieve this, we’re going to:

That’ s it for this part. Next we’ll start actually doing something!

One Response to “The Squier Project – Part 2 – Analysis & Goals”