I was born in this state. I’ve lived my entire 50+ years as a resident of this state. I’ve registered to vote as either unenrolled or independent during that time which I was eligible. My parents instilled in me the idea of honesty and fairness in everything I do.

One of the many things I hear when conversations turn to politics is how unfairly gerrymandered the congressional maps are of states that lean or are thoroughly Republican. Wisconsin, Maryland, North Carolina, Ohio and Pennsylvania have all been sued for their obvious partisan gerrymandering. That said, there’s this: 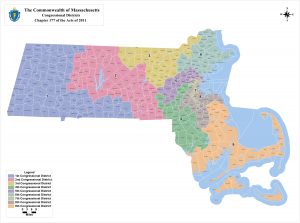 I get that living in a state that is called “progressive”, “highly educated”, and “liberal” that we might overlook such a map as simply political and not partisan. This may actually be true, however when I look at it I see a map drawn to achieve something other than fairness for the voter. I see a map drawn to segregate people into something that isn’t about fairness or honesty. I don’t know why it was drawn this way. I don’t know why anyone would divide the population of Massachusetts into such a mess unless someone simply spilled coffee during the discussion and everyone agreed that was it.

Given my strong desire for my government to provide equity to all of the voters of Massachusetts and my thorough distrust of the map shown above, I believe it’s time the legislature redress the inequity in the current district map and redraw it in such a way that demonstrates to the rest of the country how a map should be drawn. They need to draw a map that looks like it was drawn based upon population and geography and not one that shows inequities on it’s face. It needs to look like a proper, honest attempt at dividing the population into simple voting groups rather than the complex, gerrymandered mish-mash that it is today.

Step up, Massachusetts; you’re living in a glass house.

Holy Crap, I forgot a very important point in the last article! If you’ve read Part 1, then you already know that if you shift the numbers around the circle, you get the scale for whatever the 1 is on. However, the shift follows some interesting rules that allow you to determine how it’s going to change. Looking at our example scale of G major, we can see that shifting the numbers 1 position to the right gives us this:

Given we already know the 6 notes from the Gmaj scale will still be in the Dmaj scale (the CoF says they will be), then we only have to figure out the missing two. And given the “2/9” note is the same in both positions, we know that the blue “?” will be “E”. So what will the green “?” be? Well, the rule is that when shifting clockwise, whatever was the 4th  in the previous scale get’s sharped and becomes the 7th in the new scale! So, given that rule, the 7th position value must be C#. That means that our scale for Dmaj is:
D  E  F#  G  A  B  C#

Now looking at our original Circle of Fifths reference image, we know that the Dmaj scale has 2 sharps, so that’s correct. And looking at the bottom part of the reference image we’ll see that the new scale that we determined based upon the rules of shifting clockwise gave us exactly the correct scale! And we didn’t even have to look back at our reference image at all!!!!

“But what about the other direction, counter-clockwise?”, you ask (or perhaps “anti-clockwise” from across the pond).  Well, that’s exactly the reverse. Let’s look at it:

And we know that the Cmaj scale has no sharps or flats, so were good! It’s that simple.

Ok, now for the minor Scale. It’s very much the same thing. Here’s the clockwise shift for the Em scale:

In this case, we know that 4th position will be E, so that’s done. For the 2/9, it’s simply the same as earlier except we’re going to sharp the 6th position, making the 2/9 a C#. That makes the Bm scale this:

And if we do similarly for the couterclockwise shift of the Em scale, we get this:

Em couterclockwise shift to Am

Which makes the 4th another D and the 6th becomes a flatted F#, or F.

And that’s it. In summary, you now should understand that if you:

I hope that’s helpful, and sorry for the omission from the original Part 1. It’s probably just as well, as this is a lot to absorb.

Next up: Chord Construction.